These last few weeks I’ve been working on improving my wedding photography backup workflow. Warning – this article is pretty geeky, you may want to skip it unless you’re a photographer!

The winter for me is often a time for me to do small tasks I don’t have time for in the summer. Very few people get married in Jan and Feb so I’m often twiddling my thumbs looking for things to do.

It is an extremely dull but important part of my job as a Bristol wedding photographer. We all know how important it is to backup our digital life but when you’re tasked with capturing someone’s wedding day you have to take things up a level.

It’s not really something I talk about too much with couples but behind the scenes I’ve put a lot of effort in to keeping images safe. The wedding photography world is a pretty close knit community and I hear of photographers losing images at least once a year.

So I thought I’d take a little time over the winter to take stock and explain how I do things. My wedding photography backup strategy recently changed so I thought I’d put pen to paper and set it all out here. As I’ve been a wedding photographer for over 10 years I have a LOT of data to keep safe. Fortunately the price of hard drives has come down as the capacity has increased. But with 15TB of photos my system has not been cheap.

I don’t ever want to have the conversation that I’ve lost photos and I’m meticulous about backup. 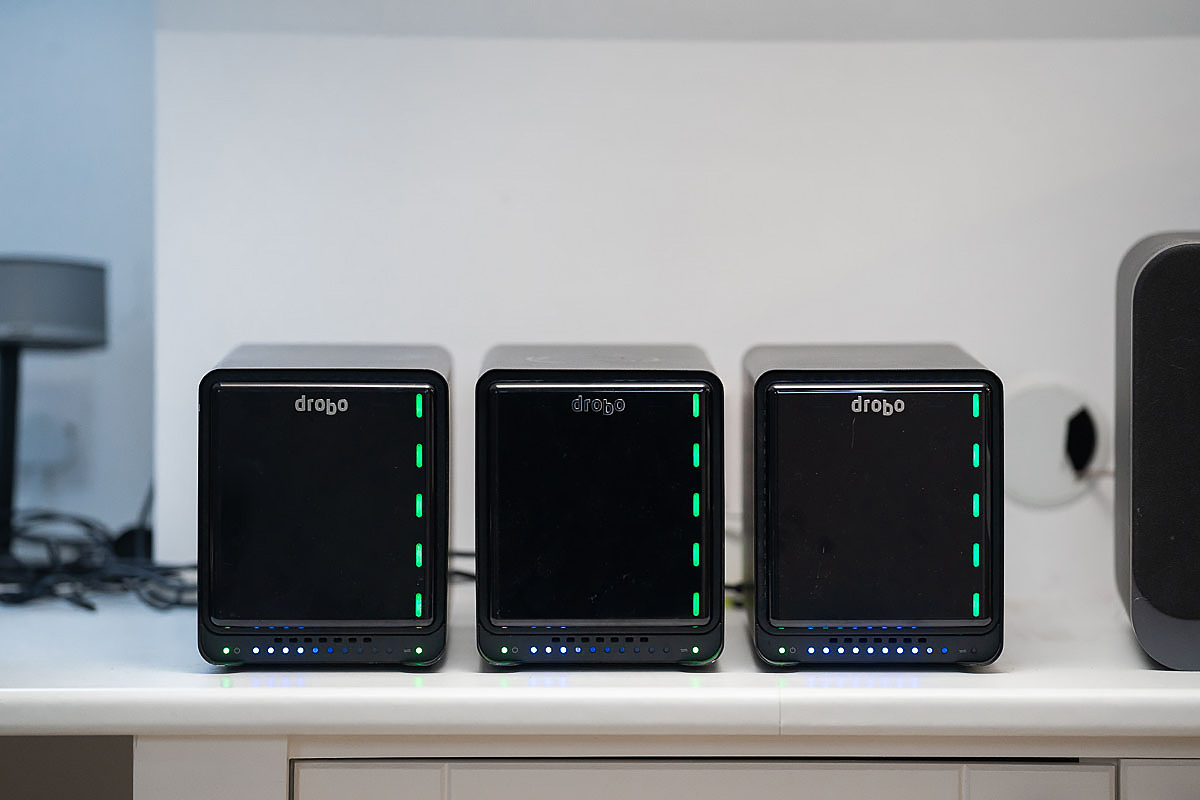 This is the simple version of how I backup wedding photos.

1. Photos taken are instantly stored on 2 memory cards in the camera.

2. Photos are backed up to an external SSD before I leave the wedding. I keep it in my pocket.

3. Photos are backed up to 2 Drobo’s once I get home (5 copies of the images if you’re counting.)

4. Once edited the final images are stored on the cloud.

That’s the simple explanation and if you find this subject boring now is the time to stop reading! But, if you’d like to read more detail here it is.

I guess it’s important to explain that it’s important to guard against every possible situation. Short of earthquakes or hurricanes I’m going to talk about fire/theft/damage. Although non of these things have ever happened it’s not inconceivable.

What do I backup? RAWs, edited jpegs and Lightroom catalogues.

Step 1. When I take a photo my camera will write it to two different memory cards. Instantly I have two copies which guards against a card corrupt. Although pretty rare this isn’t unheard of. As part of an online wedding photography group people will ask for help each year because they have lost images due to a corrupt card. It also guards against losing a card.

Step 2. During the wedding breakfast I head to my car and backup the photos to a small external SSD. It’s a very quick process with a dual card reader. This now means I’ll have three copies of the photos. The SSD will stay in the car. Should my cameras get stolen during the wedding or suffer some sort of serious damage I’ll be backed up. Before I leave the wedding I’ll spend another 5 minutes backing up the remaining photos to the SSD. I’ll keep this in my pocket until I get home.

Step 3. On my return home I import the photos on to a Drobo. A Drobo is a RAID array where data is stored over 5 hard drives. In the event that one drive fails the data is kept safe by the remaining 4 drives. This is called data redundancy and I’d recommend every wedding photographer look in to this. The good thing about a Drobo is that you can put in any hard drive. It will create one big volume. For me, as someone who has bought a lot of HDs this makes good economical sense although the Drobo isn’t cheap. Other RAID arrays require that every disk is the same so you can’t use a mix of different capacities or speeds.

One criticism of the Drobo is that it stores the data in a proprietary format. Should your Drobo die the data on your disks wouldn’t be readable by another machine… but I have three Drobos. Whilst it’s complete over kill my main Drobo is backed up to a second Drobo. If one blows up or is stolen it’s not a big problem and everyone’s data is safe. If you do use a RAID don’t forget that it needs backing up. A RAID IS NOT A BACKUP. It only protects you against a disk failing. If the RAID is stolen, damaged or destroyed you’re out of luck.

Other brands you might want to look at are Synology. I did try one many years ago and loved it. But at the time the technology meant transfer speeds were too slow. I don’t think that’s the case now but because I invested in a Drobo I’ve no reason to switch.

Step 4. I keep one of my Drobos in a fireproof secured safe. Again, as I don’t keep RAW/DNG files in the cloud this helps mitigate some of the chances of fire/theft.

Step 5. At this point my wedding photos are stored on two memory cards, two Drobos and a portable SSD. After editing the final jpegs I upload them to the cloud where the couple can download them.

Step 6. Every 2-3 weeks I take a copy of my latest files to an offsite location. This is really a ‘last resort.’ In the unlikely event that a bomb lands on my house all of the RAW files can be found at another address 30 minutes away. Because I have collected over 12 years worth of photographs (15TB and counting) keeping it in the cloud is a bit expensive and would take years to upload.

And that’s my backup strategy. If you made it this far well done! Did you spot any holes or anything I could improve on? If you’re a new photographer starting out then do realise that my method is probably overkill in some areas. It’s a system I started many years ago and have added to overtime. Largely because I don’t ever want to have a conversation which starts out by my saying ‘I lost your photos.’

To sum up I have minimum of THREE copies of data, stored in THREE different locations.

In my house, in an offsite location and final edited images in the cloud.

When do I delete wedding photos?

After a wedding I decide which wedding photos to keep. I sort the good from the bad and deliver every photo I think the couple will like. Some don’t make the cut. Duplicate photos, unflattering photos don’t get delivered for a very good reason. Non the less I aim to keep these ‘rejects’ for around 12 months. I convert them to a DNG format to save space. Very occasionally a couple might ask me if I have an extra photo of something and I’m happy to double check.

What do I do with old hard drives?

If I need more space then new harddrives are put in to my main Drobo. The old hard drive is taken out and used to ‘upgrade’ the backup Drobo. They sort of trickle down and I’m still using hard drives that are 7/8 years old. Although I’ve only ever had one HD die it’s a simple solution of pulling it out of the RAID and putting in a new one.

A short review of the Drobo for photographers.

I have three Drobos which I have owned since 2015. They’ve worked flawlessly. They are a bit expensive but because I can fill them with cheap hard drives they’ve definitely saved me money.

That said they do get mixed reviews which is a shame. They are really nicely designed, quiet and have done a great job for me. I have heard an argument that because they use a proprietary file system it’s impossible to get the data back should the Drobo fail. I partially understand this but every RAID system should be backed up. Also, because I have more than one Drobo I can easily swap drives between them should ‘the box’ fail.

I have found the Drobo fairly economical because you can fill it with all of your old hard drives. It’s a great way to extend their life however I’ve recently begun replacing them with higher quality (faster) more durable Seagate Ironwolf NAS drives. Amazingly I’ve only ever had one HD die.

What I love about the Drobo is having my entire photography catalogue available in one place. I regularly revisit my wedding photos. Tasks like updating my portfolio, making albums, finding images for Instagram is made really easy. There’s no need to dig out a HD from 2016 from the back of a cupboard because everything is instantly accessible

And that’s it! I hope this has been useful and if you have any questions leave them in the comments.

Back To Top
Search